Sharing a Proud and Colorful History 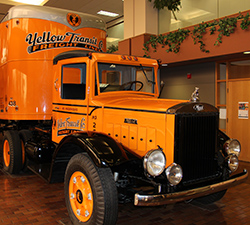 YRC Freight traces its origins to 1924 when A.J. Harrell, an Oklahoma City entrepreneur, founded a bus and taxi service that he named Yellow Cab Transit Co. He shortened the name to Yellow Transit Co. in 1926.

Meanwhile, in Akron, Ohio, brothers Galen and Carroll Roush were making transportation industry history of their own, establishing Roadway Express in December 1930.

Roadway prospered from the start—no surprise, given the founders’ approach. For example, Galen Roush recognized that providers who kept their commitments could also keep their customers and get new ones. If no trucks were available for a rush pickup, he’d rent a truck and handle the shipment personally.

In 1952, a teenager from Steinbach, Manitoba, D.S. Reimer, with help from his father, Frank F. Reimer, founded Reimer Express Lines with a route between Winnipeg and Windsor, Ontario. It was one of the first trucking companies to offer east-west traffic in Canada. Customers embraced the faster service and Reimer’s attention to customer satisfaction. The company continued to expand, and by 1969, Reimer Express was providing coast-to-coast service in Canada.

Over the years, Yellow and Roadway grew separately to become the two dominant companies in the United States while Reimer Express grew to be the largest common carrier in Canada. In 1997, Roadway acquired Reimer Express, which provided a seamless cross-border gateway and enhanced service from Canada to Mexico. In 2003, these powerful leaders came together under the banner of Yellow Roadway Corp. While back-office and other functions were combined in a best-practices approach, all three companies remained strong and independent in the marketplace. In 2009, we took the next logical step in our transformation by bringing the companies together under the YRC Inc. banner.

On Feb. 1, 2012, we took another significant step, changing the name of YRC Inc., our largest operating company, to YRC Freight. Much more than a new name and logo, this rebranding signals our intent to focus on our core business, helping less-than-truckload shippers throughout North America increase the dependability and reliability of their supply chains.

Today, we remain true to our founders’ early dedication to service. Their hard work and determination was the foundation for our success and has contributed to the success of thousands of customers.